Science and technology daily (reporter Zhang mengran) a paleontological paper published in the Journal of science report, a natural research unit, on the 11th, found well preserved large footprints in the lower Cretaceous Jinzhou formation of South Korea, which came from the ancestors of modern crocodiles. The study points out that the footprints of the giant pterosaurs that were once thought to be bipedal may actually have been left by close relatives of ancient crocodiles. 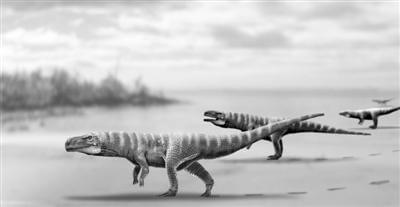 This time, a joint research team, including paleontologists from the University of Colorado, Denver, found several groups of footprints during the excavation of the zihuili site in Sichuan, South Korea. The footprints are called “batrachopus grandis” by the researchers. They come from a new crocodilian species and are the ancestors of modern crocodiles, fish eating crocodiles and alligators.

These footprints are more than twice the size of the previously discovered footprints called “batrachopodid”. Some of them are between 18 cm and 24 cm long, indicating that their body length may reach three meters. The narrower traces are left entirely by the hind foot, and some areas retain clear and skin marks from heel to toe.

The researchers found no footprints covering the forefoot, or traces left by the quadruped, suggesting that “batrachopus grandis” represents a bipedal animal. This gait has not been found in the trace samples of this family before.

Previous footprints found at sites earlier in the s were thought to have been left by giant pterosaurs when they walked on land on two feet to protect their wings, but the results of this study suggest that these footprints may have come from crocodiles. This supports the consensus reached by footprint fossil researchers that pterosaurs share limbs when they walk. This research also makes people realize that it is necessary to reexamine other similar samples of the same period in history.