How to prove that dinosaurs can swim

At present, there are more than 1000 kinds of dinosaurs known to man, which are all over every continent of the earth. On land, dinosaurs are worthy of being the overlord. What role did dinosaurs play in lakes and rivers?

In the age of dinosaurs, there are many ancient creatures with the name of “dragon” in the ocean, such as plesiosaurs and ichthyosaurs, but they don’t really belong to the dinosaur family. Scientists have not been able to find the remains of dinosaurs in the aquatic environment, some even think that dinosaurs as thermophilic animals can not survive in the water for a long time.

So, are dinosaurs land ducks? Or will they live in the water, just without trace evidence? Scientists are also confused about this.

Until April 2020, the team of paleontologist Nizar Ibrahim published their research in nature, providing the most critical fossil evidence. As “ Spinosaurus professionals”, they found a Spinosaurus’ large flat tail, and combined with the simulation of Harvard University, calculated that: this tail can produce huge propulsion – indicating that Spinosaurus can live in the water. This new discovery finally proves the existence of aquatic dinosaurs in the world.

Restoration of appearance of Spinosaurus

In the deserts of northern Africa, not only the dead Pharaohs thousands of years ago, but also the dinosaur fossils tens of millions of years ago, waiting for the lucky explorers to wake them up.

In 1912, Ernst stromer, a German paleontologist, discovered the huge bones of carnivorous dinosaurs in Egypt, including the back vertebra of one person, the cone-shaped teeth of a palm, and the chin more than one meter long. Stemore named it Spinosaurus aegyptiacus based on the high nerve spines on the dorsal vertebrae, the elongated part of the vertebrae protruding to the dorsal side. 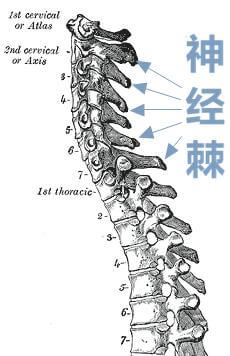 The nerve spine is a long and thin part of the spine that protrudes to the dorsal side. It is also known as the spinous process in human body and can be felt by hand|

These echinosaurus fossils are stored in the Museum of Paleontology in Munich. Unfortunately, they were all destroyed by the World War II gunfire in 1944. Since then, the huge meat eating dinosaur in Egypt has become a legend. People can only guess the appearance of Spinosaurus from the text of strom [2]. Until 1995, stermo’s grandson donated his grandfather’s sketching manuscript, on which every fragment of echinosaurus fossil was meticulously painted. Paleontologists think of continuing to study Spinosaurus and searching for fossils.

After years of exploration, it was found that the KEM KEM beds in Morocco produced the most echinosaurus fossils. Cristiano DAL Sasso, a paleontologist at the Museum of natural history in Milan, collected the first half of the skull of echinosaurus, the nearly one meter long maxilla remnant [3]. Sasso speculated that the complete skull of echinosaurus was probably more than two meters long, even 20 meters long, twice as long as that of Tyrannosaurus Rex! Therefore, Spinosaurus gained the reputation of “the world’s largest meat eating dinosaur”.

Rebellious looks are for Fishing?

Meat eating dinosaurs belong to the theropod dinosaur family, most of the members are carved like a mold: walking on both feet, leaning on the brain bag and the big mouth, holding a pair of small short hands, strong developed hind legs, a thick round tail to keep balance. 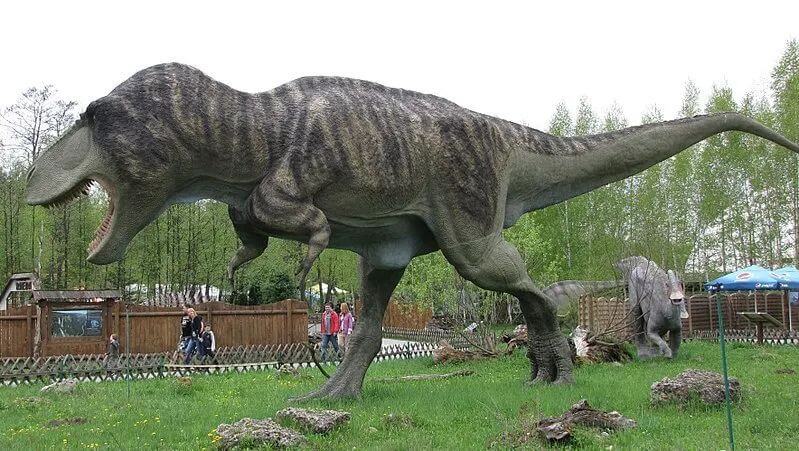 Spinosaurus was also a theropod, but it was very rebellious: Spinosaurus had an unexpectedly long head with a long snout, much like an alligator; it had a huge back sail on its back, but people didn’t know its use; the strangest thing is that generally, Spinosaurus had thick hind legs and short front legs, while Spinosaurus had short legs and sickle like claws. Weak calves always worry about whether they can support the weight of the world’s largest carnivorous dinosaur.

As a result, paleontologists have a bold idea: Spinosaurus may be a fish eating aquatic animal? In this way, it makes sense to have a long mouth and short legs – a long snout is good for reducing the resistance of underwater hunting, while short limbs and flat knuckles are good for sculling [4].

Is there any other evidence besides that?

Once the paleontologist’s brain hole is opened, it will be out of control. Every anatomical detail of this suspected aquatic animal has been carefully considered: Spinosaurus’ nostrils and eyes are close to the top of the head, making it easier to surface to breathe and observe the water conditions, similar to crocodiles and hippos [5]; its cone-shaped teeth also have longitudinal lines, similar to the teeth of crocodiles and plesiosaurs, which are suitable for fishing; CT equipment perspective internal structure found that Spinosaurus’ mouth is very small at the front There are receptors for water waves [6]; if the skeleton of echinosaurus is cut, it can be found that the medullary cavity in the skeleton is very small [4,7], this dense and bulky skeleton can counteract the buoyancy in the water, so do plesiosaurs and manatees; researchers even grind and dissolve teeth and bones, and analyze that the element composition is closer to that of aquatic animals [8]. 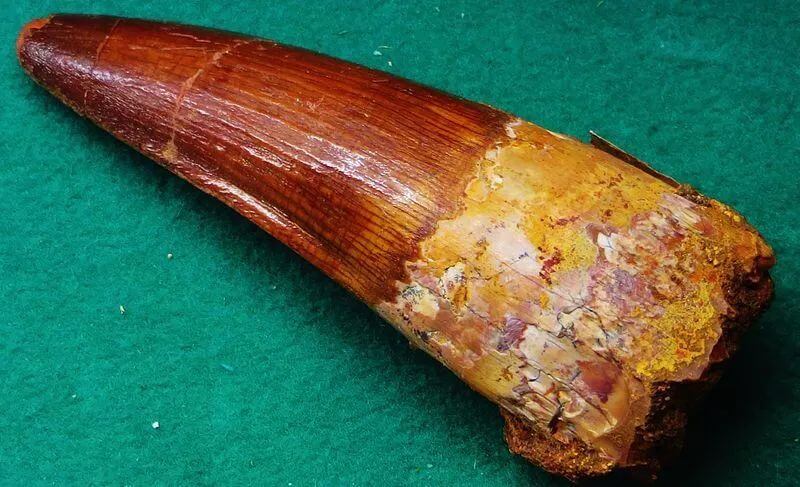 Close up of fossil teeth of echinosaurus

Despite all the efforts of paleontologists, there are still many people who doubt that echinosaurus is not an aquatic dinosaur. After all, none of the more than a thousand known dinosaurs has been proven to live in water. “ Spinosaurus is an aquatic animal”, such an idea is too deviant.

Some people doubt that the newly discovered fossil fragments do not belong to echinosaurus, while others think that echinosaurus may just fish by the river like a brown bear, not necessarily live underwater.

It is extremely difficult to draw scientific conclusions, which should stand the challenge and verification of scientists all over the world. So, is there any direct evidence that spinosaurs were aquatic dinosaurs?

Strange to say, in the past 100 years, we have found the skull, most of the vertebrae and limbs of echinosaurus, and put together most of the skeleton of echinosaurus, but we have not found the continuous tail vertebrae, so we don’t know what the tail looks like. Some scholars have simply installed a round wooden thick tail like other animals’ feet. 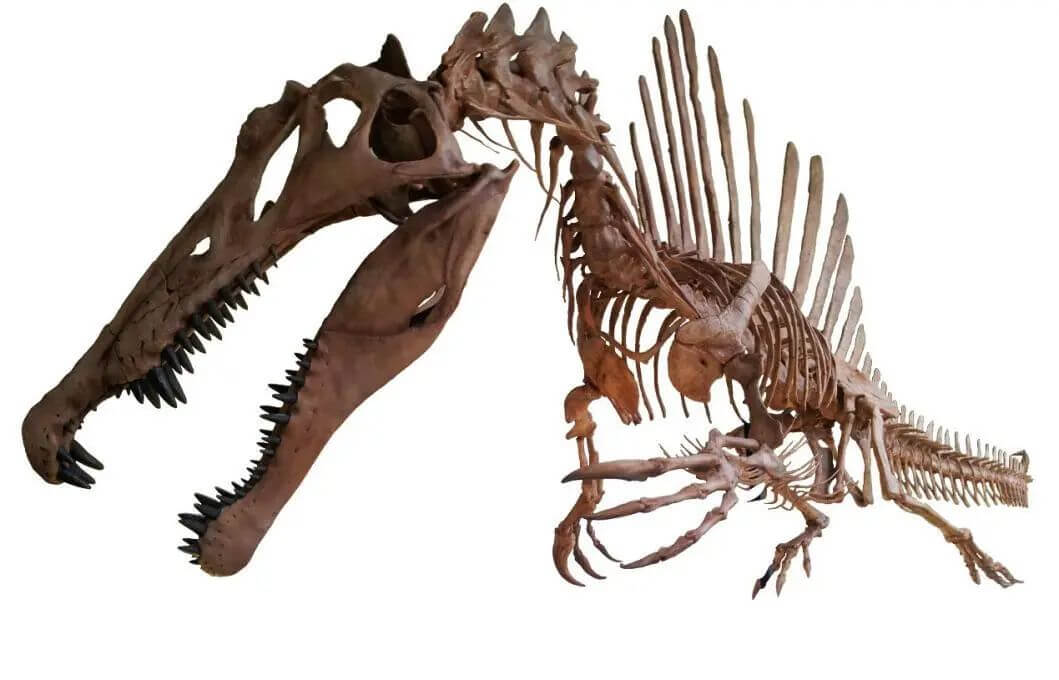 The skeleton model of Spinosaurus, which people used to make by imagination, has incorrect tail shape

In order to find his favorite echinosaurus fossil, Nizar Ibrahim has been excavating at this site for many years. But this time, in the caves where fossils were excavated in previous years, more than 30 consecutive coccygeal vertebrae appeared, with high nerve spines on them. The nerve spine in the front of the coccygeal vertebrae is 3 times higher than that in the vertebral body, and the nerve spine in the back is 7 times longer than that in the vertebral body. It looks like the coccygeal vertebrae of arthrodic fishes, with high “spines” standing on the back. There is also a long and thin vein bow on the ventral side of the tail, which together creates a large tail as flat as a paddle (the vein bow is the protruding part of the spine to the abdomen, similar to the nerve spine, but with different orientation).

The Harvard team made a machine model for this tail, put it in the water tank and let it swing, measured the propulsion force produced by the Spinosaurus tail, and compared it with other meat eating dinosaurs. It was found that the propulsive force produced by the tail of echinosaurus was greater than that of other animals, eight times that of coelenteratus, and only slightly smaller than that of crocodiles and salamanders with stronger aquatic ability. 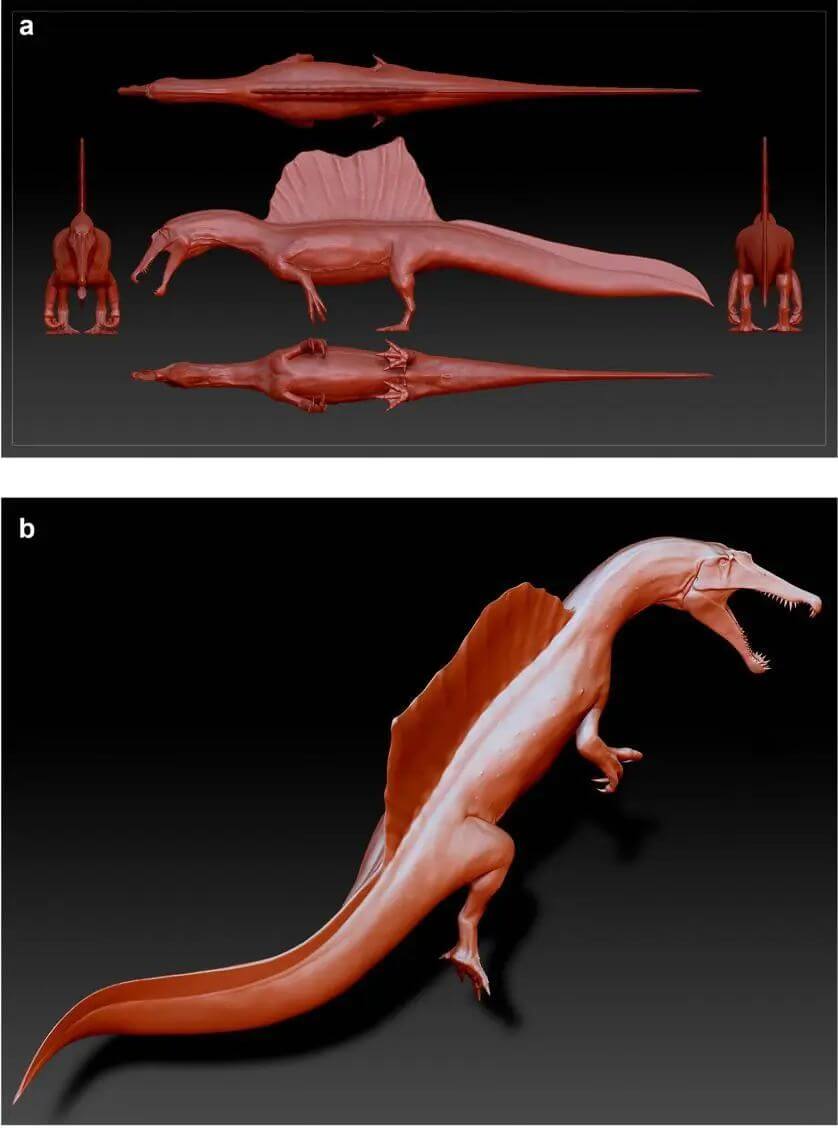 he appearance of Spinosaurus recovered by computer in this study

Thanks to this big tail, Spinosaurus swims very efficiently. If a dinosaur swimming competition is held in the water, Spinosaurus can swim several blocks faster than other theropods. Tail, the last piece of jigsaw on the skeleton of echinosaurus, became the iron evidence of the first aquatic dinosaur in history.

Scientists had been careful anatomy comparison, advanced CT scanning, sophisticated chemical analysis, racking their brains to find out all sorts of ways, it is difficult to determine the aquatic habits of echinosaurus, but now it is a tail fossil. This discovery seems to be accidental, but behind it is the persistence of paleontologists for decades.

Ibrahim, the main discoverer of echinosaurus tail fossils, was infatuated with dinosaurs since childhood. He and his research team have been digging in the Sahara desert for many years. From prehistoric giant crocodiles to large coelacanths, from land tyrants to river monsters, they have gained a lot, and new discoveries will continue [9]. As explorer Roy Chapman Andrews said: “there are always corners to explore, and the world is full of them.